There’s always something to do in Jonesville.  Any bed and breakfast can give you a nice place to stay, but the Munro House in Jonesville takes it a step further and gets people to interact. Breakfast is always a fun time with people sharing stories and making new acquaintances.  New Years Eve went a step further by getting a dozen strangers to interact while participating in a Murder Mystery Dinner. 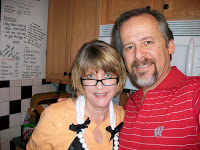 Hosts, Mike and Lori Venturini, are a two man crew who plan, host, and serve the murder mystery dinner. A five course meal was prepared and consumed while the guests tried to figure out who-done-it. The game at the Munro House is played without actors. Everyone involved in the dinner is a suspect and potential killer. The way their game is played, even the killer doesn’t know they did it until the end of the game when all of the clues are enumerated for suspects to be found innocent and one found guilty. The sleuths celebrated with a champagne toast at midnight while watching Dick Clark on the big screen. 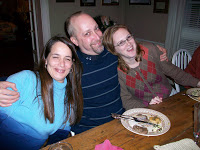 Then came New Years Day where college football isn’t the only thing to do. 12 people entered the kitchen and 12 chefs walked out using their new found skills to prepare their share of a portion of an 8 course meal including 4 appetizers, plus soup, salad, entree, and dessert.  A 6 hour cooking and consuming event known as Chef Night, was littered with conversation and camaraderie between friends who were strangers just hours before. 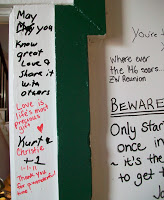 No cooking event is complete at the Munro House until the writing is on the wall–literally!  Cooks are encouraged to put some words of wisdom on the walls of our kitchen.  Thanks Kurt & Christie +1 for joining us on your 1st anniversary and the celebration of your 1st pregnancy! They wrote “May you know great love & share it with others. Love is life’s most precious gift. Thank you for a wonderful time!”