‘The Drowsy Chaperone’ is live on stage at the Sauk Theater in Jonesville. It is the best musical play-I’ve-never-heard-of before. It is the story of a guy who is reminiscing about an old Broadway play while listening to its vinyl recording on a record player in his apartment. The play comes to life as he does commentary on the intricacies of the musical from his perspective. 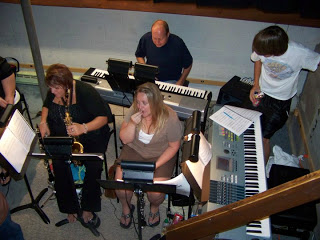 The characters include a smiling groom, an ex-actress bride, a gangster, a Latin lover, a butler, a wannabe actress, and of course, a drowsy chaperone. Some characters want the couple to get married and some of them don’t. There are sub-plots and schemes that make this a very interesting, comical, and amusing story. The live orchestra in the pit makes the soundtrack of this musical seem like a recording.

I had never heard of ‘The Drowsy Chaperone’ and am not familiar with any of its tunes, so I didn’t know what to expect. I went with a group of friends. We enjoyed the acting and singing performances of the local talent, and I laughed until tears rolled down my cheeks during much of the play. There is a scene with tap dancers, a blind-folded roller skater, an intentional big mistake, an intentional little mistake, and an airplane actually lands on stage. 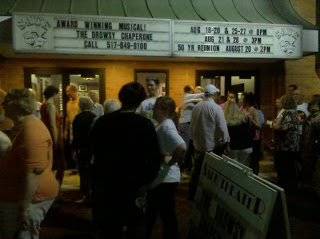 A traditional ‘meet and greet’ occurs after every show at the Sauk Theater. Dozens of patrons waited outside to compliment and mingle with the actors, director, and crew. This was absolutely the best show-I’ve-never-heard-of and is now near the top of my all-time favorites list. ‘The Drowsy Chaperone’ plays through August 28 at the Sauk Theater in Jonesville. It was the best $10 I’ve spent in a long time.