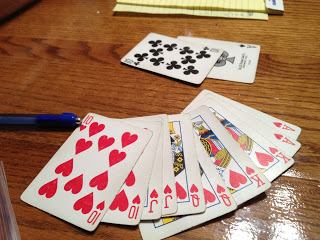 I have been playing Pinochle since the 1960’s. It is a fairly complicated card game to play. Basically, 2 Euchre decks are combined so there are two of each card–the 9, 10, Jack, Queen, King, and Ace of all four suits, for 48 cards per deck. Deal 12 cards to 2 sets of partners, then bid, then pass 3 cards to your partner, then meld, then play hand to take tricks with “count”. Count cards are A, 10, K.  Meld + count on tricks must meet or exceed bid. Simple!

Meld is made of ‘marriages’ (Q,K of same suit), ‘arounds’ (J,Q,K, or A of each suit), ‘runs’ (J,Q,K.10, and A of same suit), ”Pinochle” (J of Diamonds and Q of Spades), and the 9s of trump are always meld. Better meld is a double Pinochle, doubles around, and double run. The double run is the most points a player can meld. I’ve been playing Pinochle for almost 50 years and have never seen a hand with a double run until now–I’ve only seen doubles around twice in that same have a century. 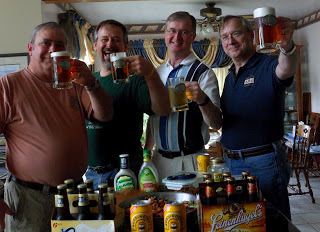 The 4 of us play Pinochle once a month at Rob’s lake house. The evening starts out with a selection of beers provided by Don. Rob supplies the menu. I make the salad. Dan does the cooking. I make cookies for dessert. We all feast until it’s time for Pinochle. We play cards and change partners until each of us has been paired up twice. We have seen many very good hands. On this night, Don had the greatest hand we’ve ever played.
Tweet

4 thoughts on “What Is the Best Pinochle Hand”