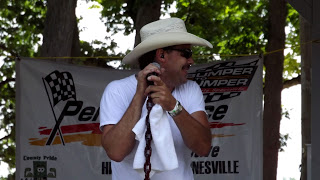 Dale Vaughn has spent most of his life perfecting his musical craft on the road in Northen Ohio and Southern Michigan. His brand of country music has been very popular at clubs, fairs, festivals and casinos in the region. We caught him on stage at the Hillsdale County Fairgrounds during the annual Car Show and Summerfest. He was having a blast singing contemporary country songs along with his own hits to the car crowd on a blistering hot day in June. 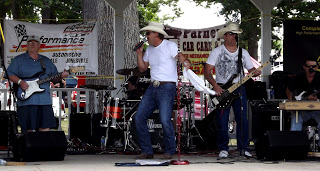 A four piece band–the Lost Horsemen–backed him up at this Hillsdale Michigan performance. The audience could easily tell that he was enjoying himself on stage as he moved about, smiled, and interacted with the crowd. He has released two albums with songs that have scored well on independent charts in America and around the world. We wish the local guy good luck in achieving his goals. 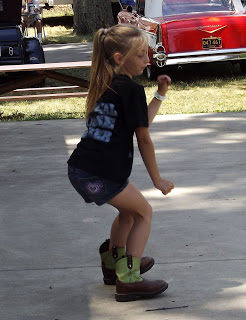 One young lady was particularly fond of Dale Vaughn and the Los Horsemen as she approached the stage and boogied to every song.
Tweet