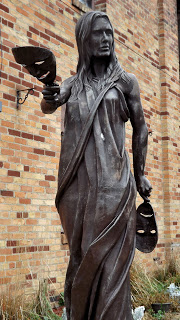 The bronze statue of a woman standing adjacent the Sauk Theater in downtown Jonesville Michigan is known as the “Sauk Theater Muse”. She has been keeping watch since May of 2006 with a mask in either hand representing the comedy and the tragedy of live theater. She was commissioned and produced by Tad R. McKillop, a visiting professor of art at Hillsdale College. McKillop was born in Detroit, educated at the New York Academy of Art, and has taught sculpture, life drawing, and design at several area colleges and universities. He has completed several monumental commissions over the years and continues to seek private and public commissions. His current studio is in Ann Arbor. 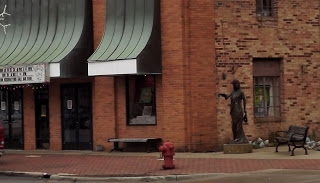 Hillsdale Community Theater (HCT) exists to bring live theater to Hillsdale County with an entirely volunteer workforce. HCT owns and operates the Sauk Theater in Jonesville as a 240 seat venue for live productions of popular shows. 5-10 shows are produced and performed by HCT and Theater for Youth each year.

Live theater in Jonesville dates back to 1905. Fires in 1932 and 1979 have resulted in substantial reconstruction of the building and occupation by numerous groups including the Jonesville Village Office and an archery club. HCT was formed in 1961 and purchased the Sauk Theater in 1972.
The Sauk Theater Muse is just 2 blocks from the Munro House B&B in Jonesville. Whenever there is a show in town, there is a dinner and theater package at the Munro House that includes bed and breakfast..
Mike Venturini