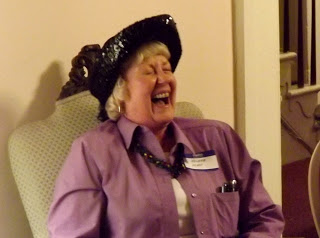 Every year, Munro House B&B in Jonesville hosts a New Years Eve Party that includes a Murder Mystery Dinner. Sometimes, there are 7 sets of strangers who become friends at the event, and sometimes there are 7 sets of friends to take over the entire house. In 2012, seven couples that attended college together planned an interactive two day reunion to finish the year. 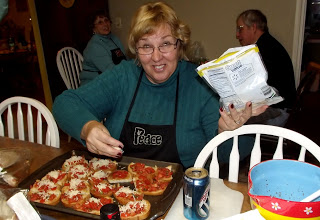 The first day had the group arrive for their annual get-together. They met at Munro House, assembled a table of snacks and drinks, and selected their rooms via a random draw. The choice of rooms was the least of their worries, as they would only be sleeping in them. This group came to Jonesville to socialize. The hosts let the guests be themselves and gave them just two rules: 1) don’t smoke, 2) don’t feed the dog. These guidelines were very easy to follow. 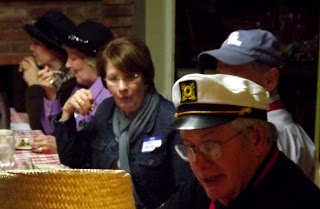 The Murder Mystery happened on the first night. This allowed everyone plenty of time to arrive and settle in before the event began. Everyone assembled around a 12′ Christmas Tree and were assigned a role in an interactive people puzzle. Each character got a hat to further identify their character. A five course meal was served as the clues unfurled, fingers were pointed, and laughter was created. At the end of the night, it really didn’t matter who did it. The play-acting allowed each person to show another creative side of themselves. 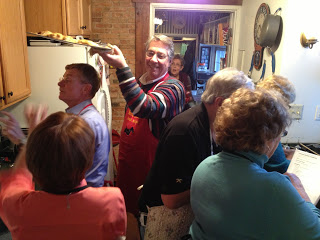 A big breakfast was served the next day before a pre-arranged tour of a local museum and courthouse. There was time for more commiserating before the second night group event began. 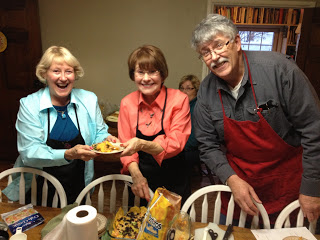 The Chef Night Cooking Party became a 6 hour interactive New Years Eve kitchen event. Guys and girls assembled in 2 person teams to create their portion of a 14 recipe feast. Appetizers, soup, salad, entree (with sides), and desserts were prepared by 2 person teams and consumed by the ensemble. As an appetizer came out of the oven, it was served while continuing to cook the other courses of the meal. Everyone was seated for the main meal that finished at about 10 o’clock. 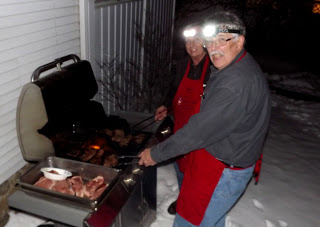 More conversation was followed by a champagne toast at midnight as we watched the celebration on TV from Times Square. We all danced “Gangnam Style” as Psy performed his international pop hit in the prelude to the ball drop. 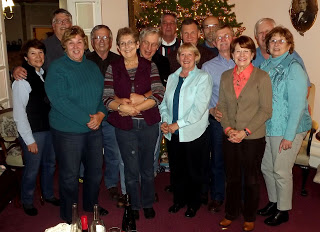 Another big breakfast was served. Afterwords, the guests left their rooms, but not the house. They had a Christmas gift exchange and continued to laugh and tell stories until mid-afternoon when it was finally time to go. They are gone. This could be your group at the end of the year.