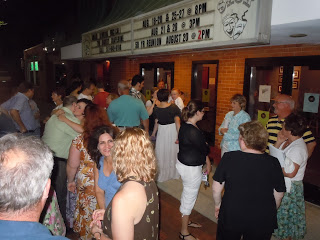 The Sauk Theater is a 250 seat facility in downtown Jonesville that is the home of Hillsdale Community Theater (HCT). Several live shows are produced here every year by HCT. Traditional musicals and dramas are standard productions by this very experienced legion of local actors and actresses.

The 2013 season has just been announced. It contains 2 musicals, a comedy, and a Christmas classic. Most shows run for 2 weeks Thursday through Sunday. Find them on Facebook for actual dates and times.

The beloved ogre makes his Michigan premiere at the Sauk Theater in Jonesville. The animated movie comes to life as an ugly person finds friends and true love.

A series of 3 musical playlets in one from the composers of “Fiddler on the Roof”. Each act has its own storyline, but all three are tied together by a common theme. Each act features someone who believes that they want something, but once they get it, they realize it wasn’t what they wanted.
Rosencrantz & Guildenstern are Dead – September 26-October 6

A hilarious twist on Shakespeare. The play expands upon the exploits of two minor characters from “Hamlet” with brief appearances of major characters who enact fragments of the original’s scenes.

A Christmas classic for the entire family. This stage adaptation of the Oscar winning movie focuses on the impact of a department store Santa Claus who claims to be the real Santa.

The Munro House Bed & Breakfast is just 2 blocks from the theater and always offers a dinner-theater-B&B package. A fun evening starts with dinner at Olivia’s Chop House, followed by the show at the Sauk Theater, and completed in a comfortable room with breakfast the next morning.