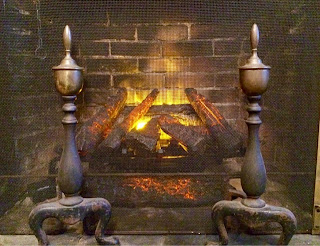 Guest bedrooms at Munro House B&B in Jonesvillle MI have been upgraded to include new Dimplex Electric Fireplaces. Previous gas fireplaces were dirty, inefficient, and useless in the summer. The new electric fireplaces have a nice glow and the availability of a no heat setting. The ambiance is great. The light from the fireplace can be adjusted to the appropriate glow. The heat thermostat can keep the room at a constant temperature. The light from the fireplace can be enjoyed without heat all year long. We hope that guests enjoy the new fireplaces as much as we do. 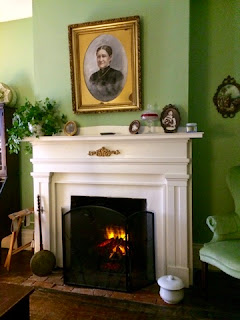 The chimney sweep was called to address issues we were having with 4 of our 12 fireplaces. There was a buildup of soot inside our bedrooms and bird nests in the chimneys had brought debris into the fireplaces. The soot was the main concern as one room needed to be cleaned and painted twice in one season. After the bird nest was cleared, we thought that the problems might not be related because the soot issue persisted. It was then that the chimney sweep informed us that we had several problems. The main problem was that the gas was no longer properly ventilating. Another problem was that the new energy efficient windows did not allow the house to breathe properly. This previously drafty house allowed for the proper draft up the chimney. Who knew that installing double paned windows would affect the way a fireplace vents? It was still possible to safely continue to use the fireplaces, but at an extreme cost that involved reconstructing the chimneys and flues. 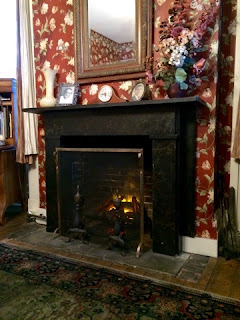 An alternative to burning wood or gas had to be found. Research was done by visiting other B&Bs that had to address similar problems and doing an internet search to find a suitable solution. Safety was a big concern, but the ability to utilize the fireplace during the summer months was a big desire. There are some very nice enclosed fireplace inserts on the market. Most of them are free standing and can be moved anywhere. However, we have built-in fireplaces with odd sized mantels and hearths, so we needed something that would fit inside our available spaces. Through personal recommendations and online reviews, we decided on the Dimplex 28 inch premium fireplace log set. I ordered one as a test. I wanted to make sure it would function as I hoped it would. It was pretty easy to assemble and install. I had it running in less than an hour. My heating and plumbing guy removed the gas pipes and capped them off. My electrician installed an electrical outlet in an inconspicuous location. I put a metal screen in front of the hearth that actually enhanced the look of the unit. Upon completion, I was satisfied with the look of the fake flame and the feel of the supplemental heat. 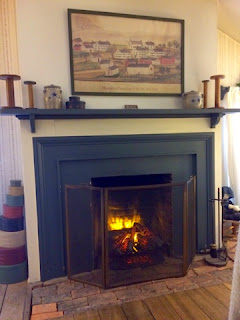 No longer would I have to worry about dangerous CO2 gas in the bedrooms, soot on the ceilings, or a concern about fire. I purchased 3 more of these units for my other bedrooms and had them installed in an afternoon. Each has a digital remote control with an exceptional LCD readout that controls the flame, the embers, and the heat. A numeric thermostat controls the heat as needed. The fireplace can be used all year long because of the ability to turn off the heat function. It does not provide a mesmerizing flame that you could stare at for hours, but it does create a very nice ambient glow that can quickly set the mood for romance. I love my new fireplaces and hope that my guests do, too.