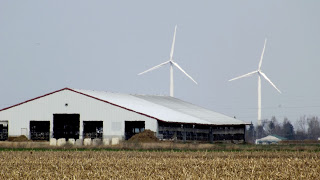 There is a wind farm in Mid-Michigan with over 130 gigantic wind turbines. It is located between Mount Pleasant and Alma adjacent highway 127 near Ithaca. The behemoths are over 400 feet tall from the ground to the tip of the highest point of the blade. Approaching the farm from the South, these huge windmills dwarf the forest below them. It is an awesome sight to see.

The wind farm crosses many properties in a wind valley that is a few miles wide and several miles long. The individual windmills appear to be placed haphazardly across the countryside–there are no evenly placed columns and rows of windmills. 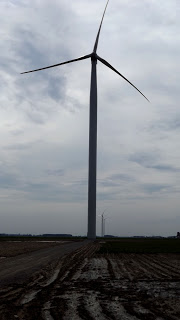 The blades turn relatively slowly–faster than the second hand on a clock, but slow enough that the blades are never a blur. They are no more an eyesore than a telephone pole or a cell phone tower. Their appearance could be deemed to be artistic, majestic, and clean. They are so gigantic that time will be needed to assess their appearance above the treeline. The noise I could hear was as soft as a whisper, but was non-stop. Michigan communities that are considering the operation of wind farms should take a road trip to Mid-Michigan to actually see what they will be dealing with and make an informed decision to vote yay or nay.